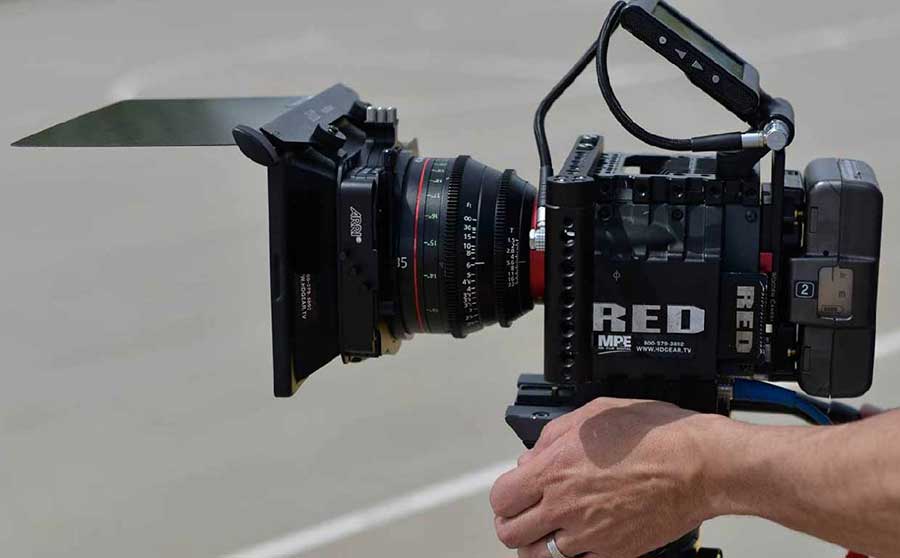 Video Production Picking the Right Camera for the Job

We shoot on RED for a variety of reasons but the biggest is the incredible quality and flexibility of the camera system. The ability to change frame rates and shoot in low-light situations makes this an easy choice for many of our cinematic productions.

The ability easily and use frame rates far above other commonly used cameras, such as the Canon Cinema line or even the Arri Alexa, means we can change the look in a scene very quickly. This allows us to shoot in slow motion on one take, reset and quickly shoot the same scene again at a different frame rate, allowing us to intercut different speeds without changing the native frame rate of the clip in post.

The RED Gemini includes a low-light sensor. This allows us to shoot scenes in a dark, minimally lit room, or after the sun sets in a natural lighting environment without the imaging becoming grainy and unusable. Here is a sample shot from one of our recent shoots. https://vimeo.com/360320595

The Role of RED in Video Production

RED debuted as a camera brand in 2007, by way of the then-revolutionary "RED One 4k” camera Even now, over a decade later, RED remains one of the preferred high-end camera brands for film production. Even with this pedigree, choosing which RED camera to use can be a daunting task. RED cameras have sensors between 25.6mm and 46.31mm and can shoot anywhere from 4K to 8K resolution and frame rates from 8 FPS up to 240 FPS. We wrote this guide to inform people, both clients and other industry professionals looking to use RED cameras for their video production projects.

Why Shoot on RED?

RED's cameras capture incredibly vivid images thanks to a modular system that yields a great deal of customization. While this means users can tweak things to their specific needs, it also means that there can be a lot of frustration for people unfamiliar with using a RED camera. For these reasons, RED cameras are ill-advised for beginning cinematographers When considering the price of RED cameras, it makes sense that only experienced professionals should consider investing in one.

The Raven was RED's lowest-priced camera and demand for the Raven was so high, the waitlist immediately became over a year. In fact, we waited over 14 months for ours and put our deposit down shortly after it was announced. If your video project is going straight to the internet, either as a YouTube short film or a streamed documentary, RED Raven's 4.5K resolution is the most you will likely ever need. This particular model also comes with a Canon EF lens mount built-in, meaning you can rely upon any Canon lens you may have lying around. The Raven was also sold as a complete camera package with every accessory you could need for filming and data transferring.

The Perfect Camera for You

The RED brand is less about offering a person their ideal camera and more about its products' modularity. In short, the best RED camera is the one YOU make with the various components available from RED. The perfect RED camera begins with a "brain," then you affix the lens and whatever accessories are conducive to the particular shot you want. The brain component is the most important element in distinguishing which RED brand camera is ideal for your purposes.

The core of a RED camera is its brain, a computer processor used to interpret and record sensor data. Every brain has benefits and drawbacks that can be combined with sensors to yield a maximum resolution of 5K, 6K or even 8K.

RED brains can be teamed up with different lens mounts and other features to build out the optimal camera for your cinematic needs, giving you the flexibility to create a unique look matched to the style and mood of your intended audience. Brains support various sizes of sensors, FPS capabilities and rates of data; all of which should be considered when selecting a RED camera for a project.

The Helium Super35 Sensor: For When You Want to get Cinematic

The RED DSMC2 and the brand new RED RANGER brains can be combined with an 8K Helium Super 35 sensor to expand your range of resolutions to 8K at up to 75 FPS. Each camera can be further paired with different lens mounts allowing for different types of lenses. This includes a PL, EF and Nikon lens mount options.

The RED Gemini available in either the RED DSMC2 or the RED RANGER configuration and features a 5K dual sensitivity CMOS sensor for shooting in low light and up to 96 FPS at full 5k resolution.

While RED cameras cannot exceed an 8K resolution, 8K Monstro VistaVision (VV) allows you to render 8k in a full frame sensor. VV was traditionally used in films like "The Ten Commandments" and "Cleopatra," the old epics of Hollywood. RED's flagship camera should be put to similar purposes; if your project is going to be something truly epic or you need to film VFX with an optimal amount of editable material, this is the camera for the job.

When you are considering resolutions that are four times as large as HD, it may seem odd to film at 8K resolution. The truth is that few screens exist that can properly display such a daunting resolution; most people will be left viewing the project at 4K or lower. While some theaters are equipped with 4K projectors and some streaming platforms claim to offer 4K viewing experiences, the reality is that most streaming audiences have a bandwidth preventing the realization of such an experience. The maximum resolution for your viewing platform should set your demands for the highest quality capture and be used as a guideline when looking to rent a RED camera. If you do not plan on using extremely high resolutions or need such resolutions for VFX, consider sticking to resolutions beneath 8K.

The Right Tool for the Right Task

Just because RED is among the top tier of cameras does not mean that it is an ideal fit for your purposes. Consider the end product, where it will be delivered, who is the intended audience, and how evergreen the footage needs to be when selecting your camera. There are many great cameras out there. Do your research and make the best choice for your individual production.